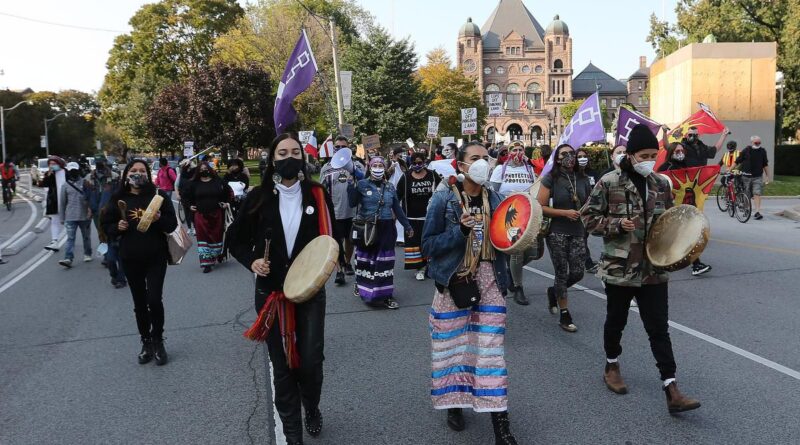 Expect to work 24/7 on-site. There are no benefits, no days off, and shelter is not provided. You will likely face threats, violence, criminalization, and arrest.

So, why are some of the most passionate, informed, brilliant, and resourceful people in Canada dedicating themselves to work that is insecure, dangerous, and unpaid?

Indigenous cultures are distinct but we share values of community, holistic understandings of all life, and a deep connection to the land and water. We know that colonial definitions of livelihood are incomplete and that our role is to live in harmony with the land that sustains us.

Land and water defenders are showing all communities the way.

They are mobilized by disasters they did not create. The state mandates their silence and removal through surveillance, policing their existence while they stand peacefully on the land they’ve lived with for thousands of years.

Canadian courts overwhelmingly favour corporations over First Nations, granting nearly 81 per cent of injunctions that seek to remove defenders from the land, according to research from the Yellowhead Institute.

The 2019 study found that, conversely, 80 per cent of injunctions filed by First Nations to stop extractive activities in their territory were denied in court.

Ignoring Canada’s blatant racism and ongoing genocide, conflicts appear simple: economy vs. the environment. Non-Indigenous rights vs. Indigenous rights. The state masks itself as an innocent bystander rather than the architect of these conflicts.

On the East Coast, the Supreme Court of Canada has reaffirmed the treaty-recognized and inherent right of Mi’kmaq to make a moderate livelihood from fishing.

Canada has failed to implement the court’s ruling, refusing to define “moderate livelihood” and neglecting to educate commercial fishers on the constitutional rights of the Mi’kmaq.

At La Verendrye Park Wildlife Reserve in Quebec, the Ministry of Forests, Wildlife and Parks this year sold fewer moose tags to sport hunters, instead of honouring calls for a complete halt to sport hunting from the Algonquins of Barriere Lake and Kitigan Zibi Anishinabeg, who rely on the moose harvest to nourish their communities.

In the path of pipelines in British Columbia, the state claims that nations have agreed to the dangerous upheaval, ignoring the sacred systems of Indigenous governance in place to ensure clean water, healthy fish populations, and the safety and security of Indigenous Peoples.

Outsiders, understandably confused as to how chief and council systems imposed by the Canadian government relate to traditional governance structures, are resistant to forming an opinion.

Although complexity exists within all communities, a narrative has been built that blames the communities’ disagreements for land use disputes rather than the systems put in place to control the people and the land.

The groundwork laid by Pierre Trudeau’s White Paper to dismantle Indigenous leadership and assimilate Indigenous communities continues as the public is either confounded, unwilling to engage, or wishing that John A. Macdonald’s “Indian Problem” would finally disappear.

When Canadians express that the priorities of Indigenous peoples on Turtle Island don’t affect them and their families directly, I wonder where and how they intend to live in the future.

Ignoring Indigenous peoples’ long-standing relationship with the land, denying our inherent rights to defend that land, and refusing to uphold our sovereignty is to ignore sacred structures that have sustained life since time immemorial.

Land and water defenders are essential workers, imagining a future for all our relations. It’s our duty to honour and support them.